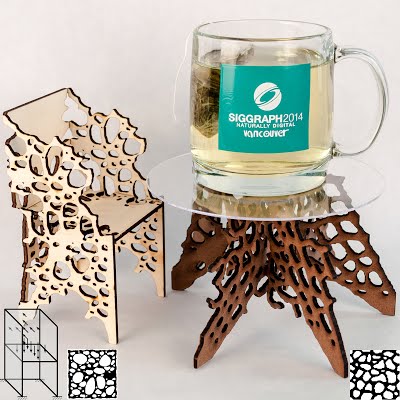 The field of topology optimization seeks to optimize shapes under structural objectives, such as achieving the most rigid shape using a given quantity of material. Besides optimal shape design, these methods are increasingly popular as design tools, since they automatically produce structures having desirable physical properties, a task hard to perform by hand even for skilled designers. However, there is no simple way to control the appearance of the generated objects.

Our approach generates rigid shapes using a specified quantity of material while observing optional constraints such as voids, fills, attachment points, and external forces. The appearance is defined by examples, making our technique accessible to casual users. We demonstrate its use in the context of fabrication using a laser cutter to manufacture real objects from optimized shapes.